Each year St. Frances Academy in Baltimore holds a Teacher vs Students Basketball game to kick off Homecoming Week. The Hallways to Health sponsored event has continued to be more and more successful each year, and this year was no exception with additional groups interested in participating. The event began during school hours but continued past dismissal and the majority of students stayed for the remainder of the event. The St. Frances Teacher vs. Student Basketball Game only allows those students that don’t participate on any of the St. Frances sports teams to join the student team. The game ended up in a very close game, with the teachers taking the win by a score of 54 to 52. The crowd was amped up by the cheerleaders that performed for both sides throughout game. 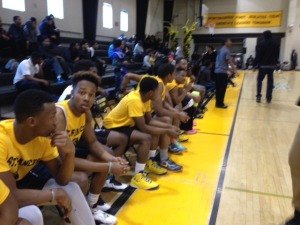